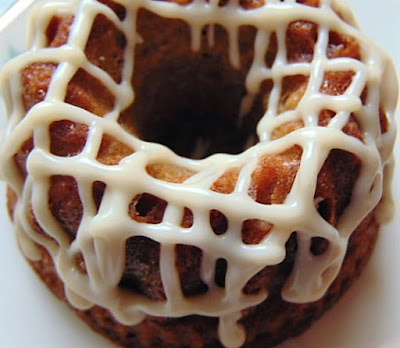 Ah the Bundt Cake....that American classic 'take to the neighbourhood pot luck, BBQ, or 4th of July picnic' cake, that conjures up the shiny innocence of the 1950's where life was all about clean living, church going, family, and wives doing the bidding of their husbands.

When I think of bundt cake I imagine Doris Day in 'Move over darling'.....as a woman normally subservient to her husbands wishes, her character 'Beverly' embarks on a career of her own with hilarious results including a Cadillac landing in the swimming pool!, but at the end of the day her husband, being male and synonymous with superiority, wins the battle of the sexes and she relinquishes her career...all to appease his punctured ego!

Along the same theme, there is also the movie 'Stepford Wives' which although it has gone through a modern day remake starring Nicole Kidman with a more comedic approach than the creepy horror filled version, it still carries those assumptions and preconceived notions with which men have viewed women since time immemorial....ones virginal wife is there to tend to ones needs by providing an immaculate home, a freshly ironed shirt each morning, gourmet meals, well behaved, perfect offspring, and then in the evening when he is greeted with his pipe, slippers and a 'how was your day dear', she obligingly turns into a sex goddess in the bedroom!
Am I wrong? have these male notions altered at all in the last 60 years? deep down I bet they haven't, although people are more careful about voicing those sorts of opinions these days as the feminists will put the fear of God into them. 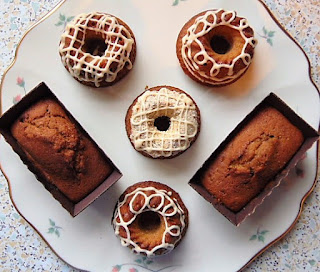 Occasionally I meet the odd man who still carries these ideals and expectations around with him and is quite willing to voice his opinions on the matter.....and really you can't begrudge him his beliefs and wishful thinking because regardless of our advancements in equality between men and women in the workplace, women are still more likely to shoulder the burden of housework and childcare at home, and are, truth be told, still more likely to sacrifice their career in order to care for the family....unless you are in the brigade who can afford nannies and housekeepers, but then you are vilified for letting 'strangers' raise your children....we can't win girls...dammed if you do, dammed if you don't sort of thing!

But time to get off the soap box or we could be here all night....these little bundt beauties are perfect for the lunch box! or just a little treat. They are only a couple of mouthfuls each so not necessarily that naughty....as long as you can restrain yourself!