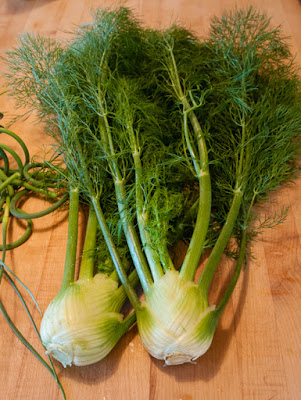 The vegetable fennel is seldom seen on the everyday tables of family homes in this country,. Viewed as an unusual vegetable that is 'expensive' and requires a lot of 'work', it is largely thought to be the preserve of posh restaurants, when really nothing could be farther from the truth.

Fennel is a delicious, easy to cook and economical vegetable. A head of fennel will cost the same as a head of broccoli, or it does in my local market, and portion wise a fennel will yield pretty much the same.
With having a very distinctive taste similar to aniseed, I always think it a cross between celery and licorice in flavour. Maybe licorice is not everyone's cup of tea, but I find when the fennel is cooked the intensity of the aniseed flavour is lessened giving a much milder flavor.

Fennel has a multitude of uses; the feathery tops can be chopped and added to sauces that go perfectly well with fish and chicken, the crisp white body called the 'bulb' can be eaten sliced raw into a salad, boiled like any other vegetable, oven roasted, braised, char grilled on an electric grill or the bar-be-que, used to liven up what might otherwise be a bland soup such as parsnip or white turnip, and even has it's place in a vegetable bake without overpowering the other vegetables used.
Fennel seeds and are a usual addition to Indian and Pakistani cooking. They are aromatic and spicy and a great way to enjoy them easily is to fry them in a little butter and toss in some cooked white or red cabbage which will absorb those aniseed flavors delightfully.
CLICK TO READ MORE >>