While my regular RHG has been missing in action I've used a couple of different clays to test them out. Some of the pots I've made from them have been in recent posts. Those pots are still drying and not yet bisqued.

But with the last glaze firing I fired a couple of test pieces of the Walkers Special and the Toast clay; as I have used in the past my now standard shrinkage and deformation tests.

This picture shows the Walkers in the front and the Toast behind. The Walkers deformation is very similar to that I've seen with RGH under the same firing schedule - my cone 6 schedule. Toast moved far less, no doubt because of the heaving grogging of the body, which will elevate the maturity temperature of the clay and thus see less vitrification. The shrinkage testing pretty much confirms this suggestion. 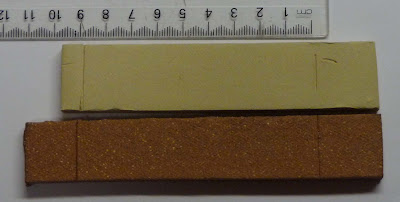 In the shrinkage test I start with a bar of clay and make two marks exactly 100mm apart. Measure again when dry and after final firing. The Walkers shrinkage is 12% and the Toast 9% after glaze firing. RGH under the same schedule shows about 12.5%. The Walkers fired to a nice off white colour.

The big oval I made with the Walkers Special is nearly dry enough to leave uncovered after two weeks under plastic. I mixed in a little more RIO to buff up the final fired colour. It would otherwise be just offwhite.
Here's a picture of it the right way up. You can see the props under the pot that I use to support it while drying, separated from the pot by a piece of newspaper. The same props go through bisque firing with the pot and then are ready to do the same job in glaze firing. The Walkers clay has an amazingly smooth finish almost like it's been burnished. Now there's an interesting test to run some time.

The pot started when wet at 670mm and should now be down to 636mm; to get to 590mm when glazed; just right, if my shrinkage testing is replicated.